When it comes to solar energy, a common question is how electricity generation will be affected by seasonal shifts or daily changes in the weather. These variations become especially important when households and businesses consider using rooftop solar panels to serve their electricity needs, such as for charging electric vehicles (EVs). By analyzing a full year of data collected from the solar array on the Great Plains Institute’s own rooftop, paired with the electric vehicle chargers at our building, we have gathered insights to answer to this question.

Key takeaways of our analysis:

This is the first post in a series sharing GPI’s results and insights from the pilot project at our headquarters to synchronize on-site solar energy production with electric vehicle charging using a managed charging system. Here’s what to expect:

Electricity production at the solar panels varies throughout the year due to several factors. As the Earth’s tilt relative to the sun shifts each season, the intensity of solar rays and hours of sunlight at a given location change. Located in the Northern Hemisphere, GPI headquarters tilts toward the sun in the summer months. This means that during the summer, our building receives more direct sun rays and gets more hours of sunlight per day. When the Northern Hemisphere is tilted away from the sun during the winter, the sun’s rays hitting GPI’s solar panels are less intense and there are fewer hours each day for the solar panels to soak up sunlight.

Figure 1. Tilt of the Earth relative to the sun over the course of the year 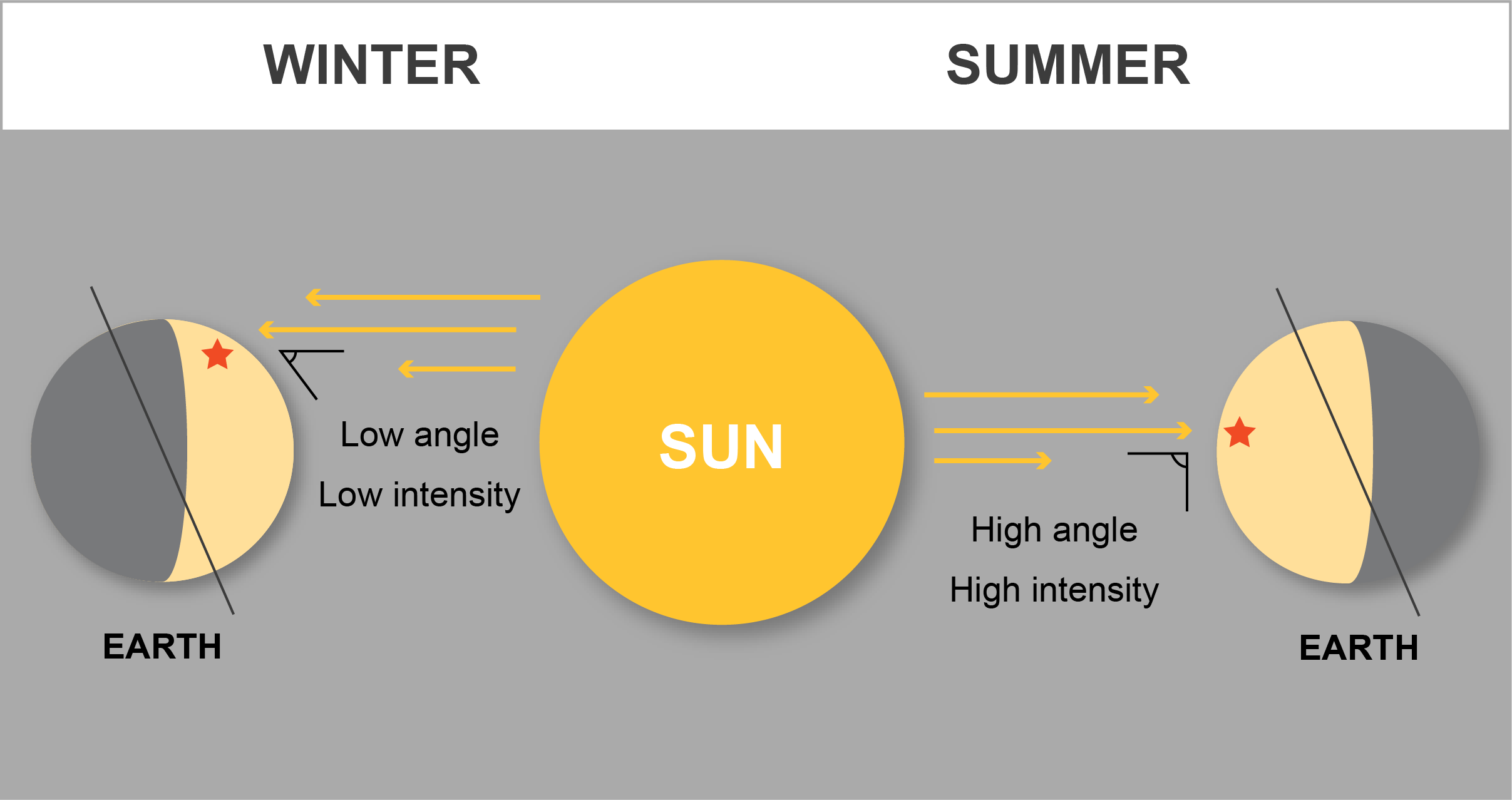 Solar panels operate most efficiently in full sun, but they don’t stop producing electricity when it is cloudy, raining, or snowing. However, if snowfall on the solar panels doesn’t melt quickly, it can reduce solar generation long after snow has stopped falling and until the snow is cleared. So, even though solar panels function in cold weather, a prolonged freezing period coupled with snowfall can drastically cut down the amount of electricity generated at a solar panel and available for EV charging.

Figures 2 and 3 show solar production at GPI’s solar array in December and in June, 2019. Each yellow dot represents a data point collected at one minute of the month. In the December graph, we can see that solar generation doesn’t ramp up until around 8 a.m. and tapers off by 4 p.m. On the other hand, in June, the solar arrays begin generating energy at around 6 a.m. and don’t stop generating energy until around 8 p.m. We can see that in the December graph, solar generation tends to peak at around 15 kilowatts (kW), given that the sun’s rays are less intense during winter, and that some portion of the solar array could have been covered in snow. In June, solar generation consistently peaks at around 25 to 30 kW, when Minnesota is tilted toward the sun and receives more direct and intense rays of sunlight over the course of the day. 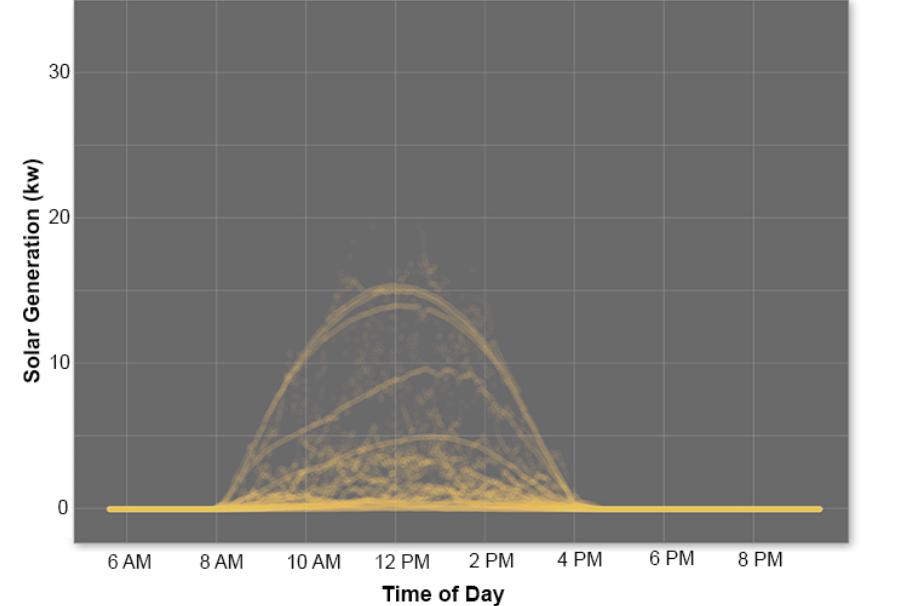 With the sun rising earlier and setting later as spring turns to summer, the span of dots on the bottom axis widens. Receiving more intense rays of sunlight in the summer, peak solar generation values on the graph rise. Graphing solar production month by month highlights the cyclical nature of solar generation at our solar panels as the seasons change. In the figure 4 gif, we can see this cycle in action as conditions change throughout the year.

These graphs show that even though solar generation is lower in the winter, the panels still consistently generate enough energy to charge an EV. GPI employees typically arrive with their EV battery partially charged and leave their EV charging until the battery is full. Though there is variation among EVs, we can generally expect an EV to go from half to full charge in around 2 hours when charging at 10kW per hour. With winter solar generation often clearing 10kW during peak hours of the day, we can rely on energy from the solar panels to restore an EV to full charge within a couple of hours on most winter days. On winter days when solar generation is especially low, the panels may still produce enough energy to contribute to charging an EV, while energy drawn from the grid is used to maintain a minimum power level at the chargers.

These findings indicate that solar is a viable energy source year-round, even in snowy Minnesota. This example of complementary solar generation and EV charging also gives an indication of what could be possible for coupling EV charging with renewable energy at a much broader scale. This pairing of renewable electricity with electric vehicles is an important opportunity as we look to bring down emissions from both electricity generation and transportation.

Learn about the collaborative effort that brought these chargers to our office building, how the system works, and about the US Department of Energy pilot served by the chargers in our previous post.