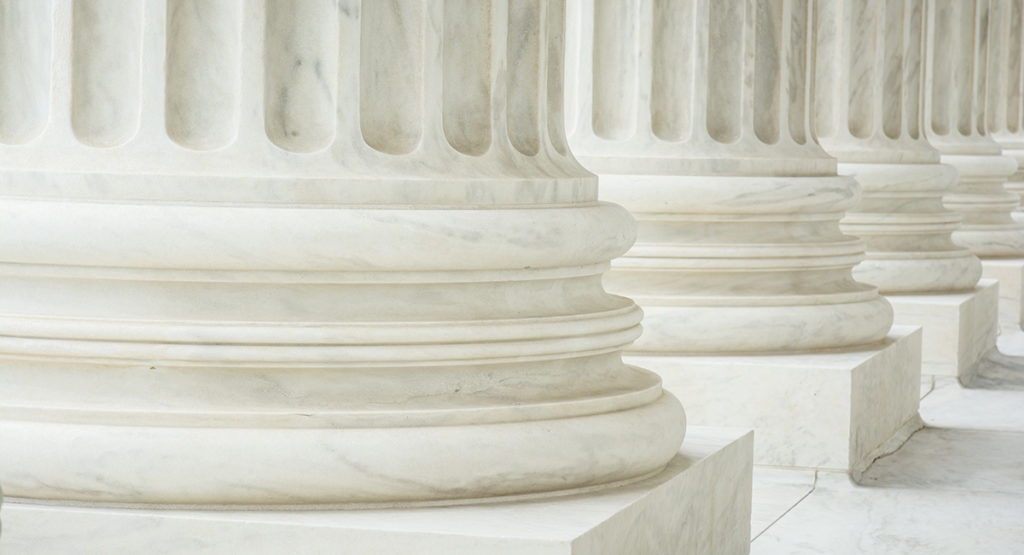 Reaching decarbonization goals by 2050 will require large-scale deployment of carbon capture. Fortunately, carbon capture has been demonstrated at commercial scale for use in electric power and key industries, with successful commercial experience dating back decades in some sectors.

Reaching economywide deployment at the scale needed for decarbonization will require supportive public policies to leverage increased private investment in projects and infrastructure, spur innovation, and reduce costs. Incentivizing early commercial deployment is especially important in industries such as cement, steel, chemicals, refining, and others that lack readily-available­ emissions reduction alternatives. This is especially the case for those industrial processes in which carbon emissions are inherent to the chemistry of the process itself.

The phrase “economywide deployment” is used in the Carbon Capture Coalition’s Federal Policy Blueprint (GPI convenes the Coalition) to describe the critical mass of commercial-scale capture projects that “must be developed in key industrial sectors and power generation between now and 2030 to enable the scaling of the technology needed by midcentury to reach decarbonization goals.”

In other words, this is the level of carbon capture deployment needed in the near-term to achieve long-term carbon reductions.

Also, while the US has over 5,000 miles of existing CO2 pipelines and a decades-long track record of transporting CO2 at scale, there is a need for additional infrastructure to link facilities from which CO2 can be captured to locations where it can be geologically stored or put to beneficial use.

Federal policy can play a critical role. It can support the near-term carbon capture and infrastructure project deployment that is a prerequisite for ensuring carbon capture’s availability as a tool for decarbonizing the energy system by 2050.

Federal policy can also support emerging industries that use captured carbon for beneficial use to make fuels, chemicals, building products, and advanced materials with low- to negative- carbon emissions. Carbon capture in established and emerging industries can both sustain and create high-wage jobs while reducing emissions from key sectors of the economy.

Fortunately, a broad set of interests and a growing group of bipartisan leaders in Congress are working together on policies that can support economywide deployment. These policies build on last year’s successful reform and expansion of the 45Q tax credit for carbon capture, via passage of the FUTURE Act, that laid the foundation for jump-starting the industry in the US. Earlier this year, the Carbon Capture Coalition released a first-ever Federal Policy Blueprint that recommends a portfolio of policies to increase carbon capture deployment in critical industries, from ethanol and fertilizer production to refining, cement and steel to electric power generation. The Blueprint reflects a consensus of the over 70 companies, unions, and NGOs participating in the Coalition.

Here is some of the legislation under consideration in Congress, summarized based in part on information shared in statements by the Carbon Capture Coalition.

USE IT Act (Utilizing Significant Emissions with Innovative Technologies)

As the Carbon Capture Coalition described in an endorsement when the USE IT Act was originally introduced in 2018, the Act seeks to foster continued development and deployment of carbon capture by expanding federal support for research, development, and demonstration of carbon utilization and direct air capture technologies. It would also support collaboration between federal, state, and non-governmental interests to facilitate the planning, siting, and permitting of pipeline systems to transport CO2 for ultimate storage or use. Read statements of support for the USE IT Act from Coalition members.

Why this is important: the USE IT Act provides important support for carbon capture to be applied in industries that can transform captured carbon into high-value products while reducing emissions. The act would also support the buildout of the infrastructure required for economywide carbon capture deployment.

The US Senate passed the USE IT Act on June 28, 2019, by a vote of 86-3 as part of the National Defense Authorization Act. The act was introduced by Senators John Barrasso (R-WY), Sheldon Whitehouse (D-RI), Shelley Moore Capito (R-WV), and has 14 other co-sponsors. It was introduced in the US House by Representative Scott Peters (D-CA) and currently has 44 cosponsors. Forty members of the Coalition recently sent a letter to the chairmen and ranking members of the House and Senate Armed Services Committees to support keeping the USE IT Act in the final version of the National Defense Authorization Act. At this writing, negotiations on the USEIT Act are stalled in the House. Should the USEIT Act fail to move forward as part of the National Defense Authorization Act, we remain hopeful that the legislation will be adopted as part of S. 2302, America’s Transportation Infrastructure Act of 2019 which was introduced by Senator Barrasso in July.

As my colleague Patrice Lahlum wrote in a previous blog post, this bill would reform the Section 48A tax credit, correcting “program design flaws that have made it impossible for companies to access existing incentives for retrofitting currently operating US coal-fired power plants with carbon capture technology.”

Why this is important: this bill, which was endorsed by the Coalition, is critical to US leadership on technologies that are needed to achieve midcentury climate goals given the vast and relatively young fleet of coal power plants in China, India, and other emerging economies, which will require widely demonstrated and cost-effective retrofit solutions to capture and manage their CO2 emissions.

This bill authorizes the use of tax-exempt private activity bonds to finance carbon capture equipment installed at power plants and industrial facilities.

Why this is important: this bill would support carbon capture project development by allowing such projects to access tax-exempt private activity bonds, which have a long track record as an effective tool for financing infrastructure projects. Read the Coalition’s statement endorsing the bill.

As shared by the coalition in their endorsement of the Fossil Energy Research and Development Act, which is similar to the EFFECT Act (also supported by the Coalition) introduced in the Senate, the legislation would “boost funding for carbon capture research and development and direct new research efforts within the federal government aimed at improving carbon dioxide (CO2) storage and use and developing new CO2 utilization technologies.” The legislation is a key element of the coalition’s Federal Policy Blueprint.

The LEADING Act complements the EFFECT Act and would establish a program within the Department of Energy to support greater R&D for the development and demonstration of carbon capture technologies for natural gas facilities.

The LEADING Act was introduced by Senators John Cornyn (R-TX), Chris Coons (D-DE), Bill Cassidy (R-LA), and Kyrsten Synema (D-AZ) in the Senate and by Representatives Dan Crenshaw (R-TX) and Henry Cuellar (D-TX) in the House.

All three of these bills were recently reported out of the House Science, Space and Technology Committee and Senate Energy and Natural Resources Committee, respectively.

This bill would support project financing by expanding the eligibility for master limited partnerships to carbon capture and utilization projects.

Why this is important: as shared in the Coalition’s endorsement of the bill, the act would enable master limited partnerships to be used as a financing tool for carbon capture and utilization projects, providing those projects the tax advantages of partnerships, while allowing them to raise equity in public markets, thus making capital available on more favorable terms.

As shared in a coalition statement about the bill (House and Senate versions), the act would expand “research, development, demonstration and deployment of carbon capture and utilization technologies across a range of vital industries.”

Why this is important: this bill would support the expansion of research, development, demonstration, and deployment of carbon capture and utilization technologies, in addition to other critical technologies, that can manage and reduce industrial emissions. As coalition member organization Clean Air Task Force stated, “The industrial sector produces 25% of global CO2 emissions. But this sector has historically received the least amount [of] support for development and deployment of technology to reduce carbon emissions. This bill would address this critical gap and provide much needed funding to catalyze these technologies, including the application of carbon capture and the use of zero carbon fuels, such as hydrogen.”

The bill was introduced by Senators Sheldon Whitehouse (D-RI), Shelley Moore Capito (R-WV), Joe Manchin (D-WV), Braun (R-IN), and Cory Booker (D-NJ) and Representatives Sean Casten (D-IL), David McKinley (R-WV), Eddie Bernice Johnson (D-TX) and Amata Radewagen (R-AS). The Senate version of this legislation was recently reported out of the Senate Energy Committee and is expected to be included in a broader energy innovation package to be considered in the next session of Congress.