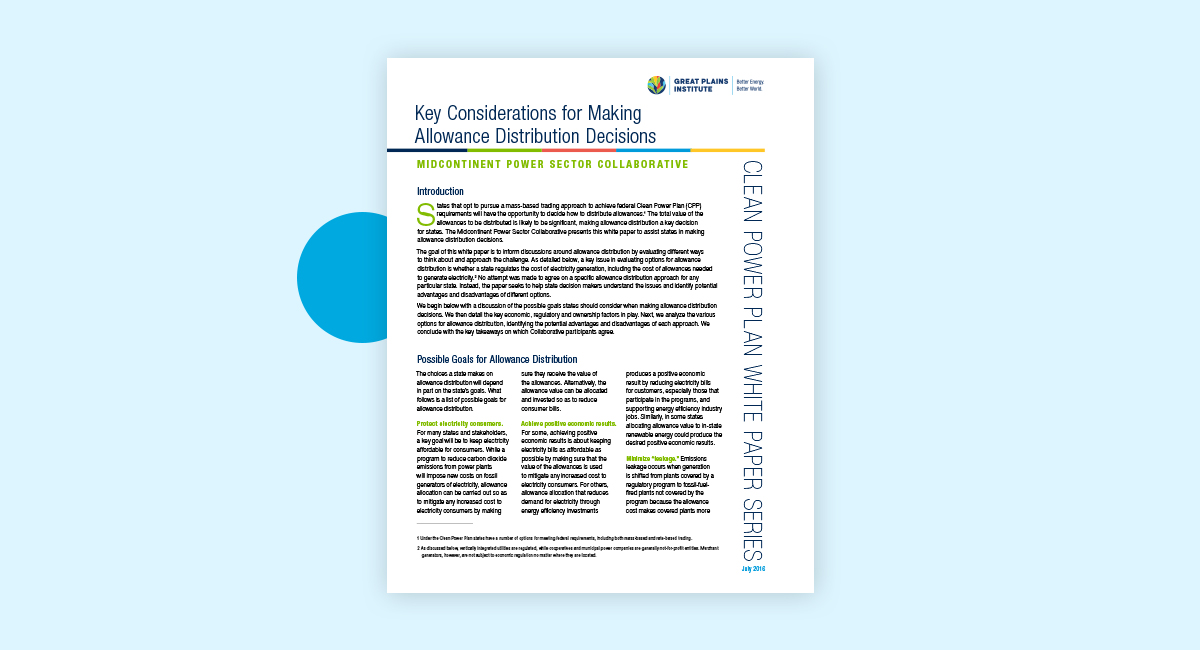 Assuming it survives a pending legal challenge, the Clean Power Plan will require states to develop and submit plans to reduce carbon dioxide (CO2) emissions from power plants.  States that choose to implement mass-based emissions trading programs under the Clean Power Plan must decide how to distribute the “allowances” that are required for each ton of CO2 emitted and that represent the central feature of such an approach.

The Midcontinent Power Sector Collaborative’s first white paper, “Key Considerations for Making Allowance Distribution Decisions,” begins by exploring the possible goals states might have in mind when making allowance distribution decisions.  It then examines the economics of allowances, before examining the options for allowance distribution and the opportunities and challenges with each option.

Why do we care about allowance distribution?

Most states are expected to implement mass-based trading programs under the Clean Power Plan.  Under this approach, every covered power plant must measure and report its carbon emissions and periodically must turn in enough allowances to match its emissions.  Each state gets a prescribed number of these allowances for each year of the program, representing the amount of carbon dioxide that is collectively allowed from covered power plants in the state.  Because covered plants need allowances to operate, and they are limited in number, allowances have value, especially later in the program as the stringency increases.

The value of each allowance issued by each state under the Clean Power Plan depends on the demand for the allowances, but analyses to date have suggested the allowances may be worth between five and fifteen dollars each later in the compliance period.  The state of Minnesota, for example, would issue more than 27 million allowances in the first year of the program, which could translate to a total value of between $135 million and $405 million [in the first year of the program alone based on this estimated range of allowance prices].  Through allowance distribution decisions, state officials can make sure that consumers receive the full benefit of this allowance value.  So the decision a state makes on allowance distribution is very important.

The Collaborative observes the following key takeaways after discussing the allowance distribution issue:

ABOUT THE WHITE PAPERS
The Midcontinent Power Sector Collaborative white paper series is the work product of the Midcontinent Power Sector Collaborative, convened and staffed by the Great Plains Institute.  Participants were given an opportunity to review a draft or drafts of the white paper and their comments were taken into account before it was finalized.  Every effort was made to ensure that agreements among participants are reflected and that differing opinions are captured in the text as well.  To encourage candid exchanges and creative thinking, participants were assured that participation implied neither support nor opposition to the Clean Power Plan or its implementation by states, nor support or opposition to specific policy choices described in the papers.  Ultimately, the goal of the MPSC is to inform better public policy.