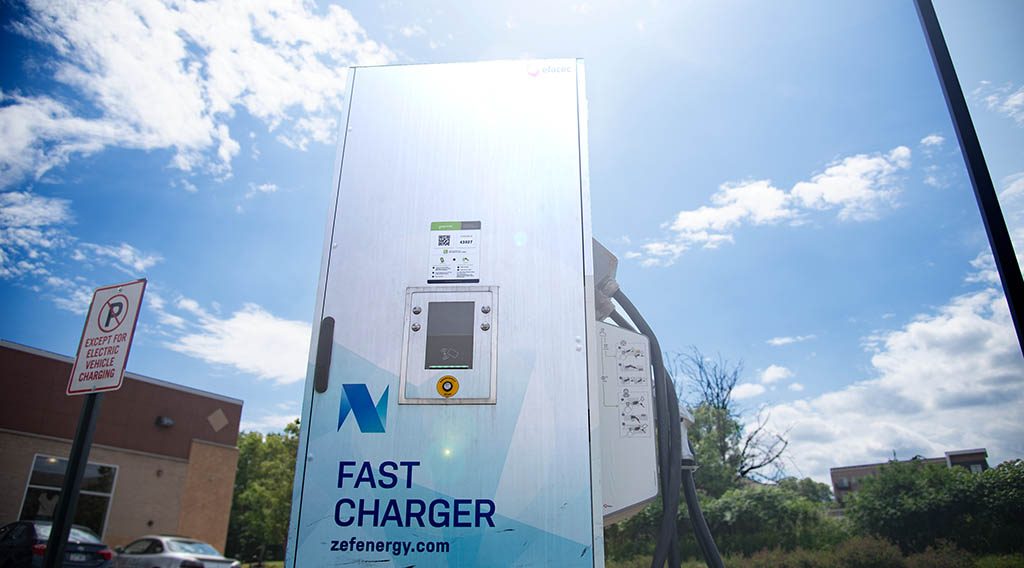 GPI recently released a white paper analyzing the economics of direct current fast charging (DCFC) as part of our work with the Midcontinent Transportation Electrification Collaborative (MTEC). DCFC stations are critical for widespread adoption of electric vehicles (EVs) because they provide access to much faster battery charging in public places and along major driving routes and highways. The white paper focused on a specific barrier to increased DCFC stations in the region: electric utility demand charges.

Identifying the impact of demand charges is important given the critical need for more DCFC stations in the Midcontinent region and across the country. As analysis by the National Renewable Energy Laboratory shows, the Midcontinent has a huge “charging gap” to support higher levels of EV adoption. In the Midcontinent, there are currently 425 public DCFC plugs and the National Renewable Energy Laboratory’s analysis indicates that 4,020 will be needed by 2030 (a gap of 3,595) to achieve higher levels of adoption in the region.

A typical Level 2 charger can take between 1 and 5 ½ hours to completely charge a vehicle battery, compared to only 3 to 24 minutes for a DCFC thanks to an increased power capacity or wattage.

Level 1 and Level 2 charging stations use alternating current (AC) at power capacities of less than 15 kilowatts (kW). In contrast, a single DCFC plug runs at a minimum of 50 kW. Fast chargers that can run at 150kW are becoming more widespread and systems up to 350 kW are under development. A DCFC station with more than one plug can easily hit 350 kW or even 1 megawatt (MW) of electric demand if multiple vehicles are charging at once. Even though an EV may require the same amount of energy from any type of charger to fully recharge the battery, fast charging requires more power to deliver that energy quickly. This potential for high demand, however infrequent, is why a DCFC station can become costly to operate: electric demand charges.

What is a demand charge?

Most of us pay our electric utility for the total amount of energy we use each month in terms of kilowatt-hours (kWh). One kilowatt-hour means 1 kW of electric demand sustained for 1 hour. The amount we pay for this electric consumption is called an energy charge or volumetric charge.

Commercial and industrial electric customers have much higher electric demand due to heavy industrial equipment or the energy needed for providing lighting and power to hundreds or thousands of employees. Providing this high power capacity can be taxing on the electric distribution system. The electric system must be built and operated to meet these peak demand events, which may require the utility to operate additional equipment to manage the electric load. Therefore, electric utilities often bill their commercial and industrial customers an additional demand charge, generally based on the highest peak demand for power capacity within each billing period. For this study, GPI assessed electric rates in states along the Minnesota to Michigan corridor on Interstate 94.

Because most households generally do not exceed around 5 kW of electric demand at any given time, we do not pay a demand charge for residential service. A DCFC operating between 50 kW and 350 kW, however, will likely incur demand charges, especially if two or three vehicles are charging simultaneously. Even if this only happens once in a month, the operator will get billed for a very large demand since this charge is based on the peak use occurrence for each billing cycle.

Based on our research, GPI built a model to study and calculate the construction and operating costs of DCFC stations. The primary question we tried to answer was: How frequently must a DCFC station be used by customers, and how much do they need to pay, for the station to break even each year? Cost factors such as electric rates, demand charges, cellular and data network costs, billing services, and customer charges were considered, among others. You can find the full details on how we built this model and which factors were included in the white paper.

A wide range of scenarios are also described in the white paper. Generally, we found that it is less costly to operate a single 50 kW charger, and some of these chargers can break even with as little as 2 to 5 charging customers per day depending on the rates charged by the electric utility. However, in most other cases, it is very difficult for a DCFC station to break even due to demand charges.

Here are a few examples of the findings under different scenarios: 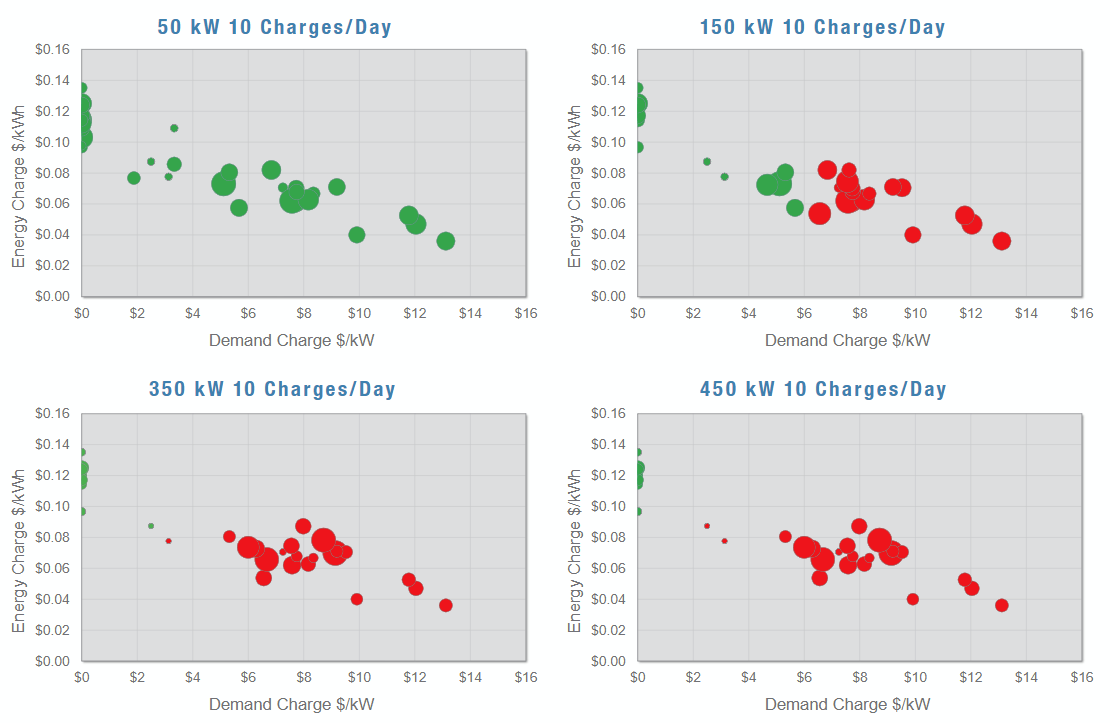 Each circle represents a charging station under a single electric utility’s rate. Green circles break even each year, while red circles incur charges that are too high to break even. Each circle is sized according to the level of each utility’s flat customer or service charge.

The findings clearly illustrate a barrier to investment in more DCFC stations—and, in turn, to increased EV adoption. Today’s economics and the average electric utility rates mean that nearly all DCFC scenarios lose money except for a single charger at the lowest 50 kW power level. Furthermore, our research indicates that reaching 10 charges per day is not happening anytime soon, based on current EV penetration levels and forecasts. 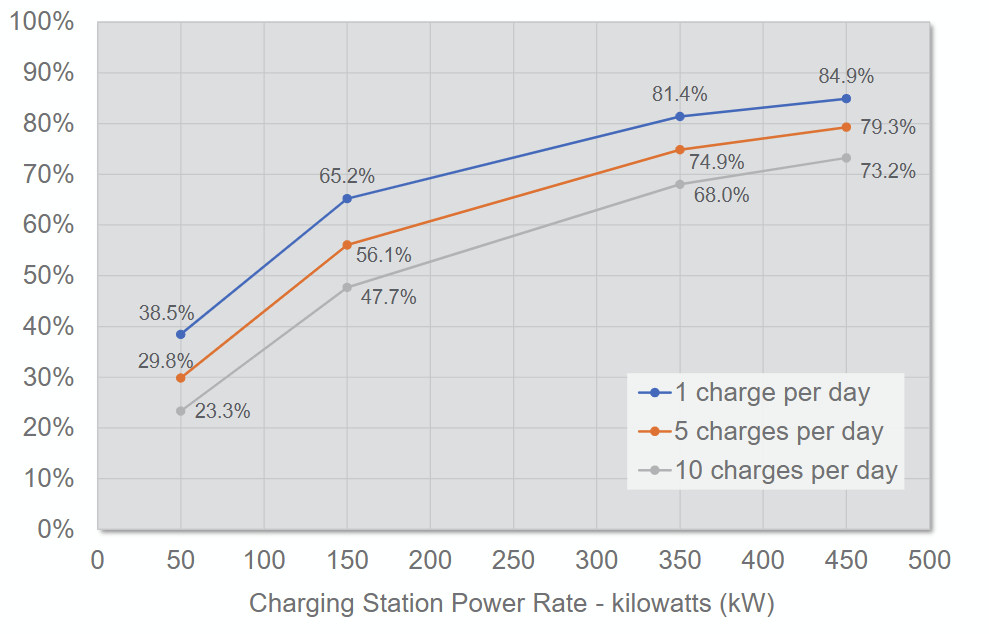 As you can see in figure 2, most stations that do NOT pay a demand charge can more easily break even. Figure 3 shows the relationship between station power level, customer utilization, and the share of total DCFC operating costs attributable to demand charges. At 50 kW, demand charges account for 24 percent to 39 percent of a DCFC station’s annual costs. If the station capacity is increased to 350 kW, the cost share of demand charges grows to 68 percent to 81 percent of total costs.

Demand charges exist for a reason: the heavy electric demand from large commercial and industrial customers does increase distribution infrastructure requirements and costs for electric utilities. Compared to those facilities, perhaps a DCFC is not as impactful on the distribution system and alternatives to demand charges could be used to account for this. There are also multiple economic, environmental, and social benefits to increased adoption of EVs and charging stations. Plus, more EVs means more electric customers and demand for the electric utility to serve. Under certain policies, it’s also possible for the utility to get credit for the greenhouse gas reductions of a customer switching from gasoline to electricity. As we note in the white paper, some utilities already offer to reduce or eliminate their demand charge for EV charging stations. As you can see in figure 3, eliminating the demand charge can decrease operational costs for DCFC stations by as much as 85 percent.

Given the role of DCFC stations in accelerating EV adoption, it will be important to address this barrier. The analysis provided in the white paper is intended to give utilities, regulators, and other stakeholders informational tools that can help address this problem in a way that works best for their system and customers.

Our white paper, “Overcoming Barriers to Expanding Fast Charging Infrastructure in the Midcontinent Region,” can be found here.