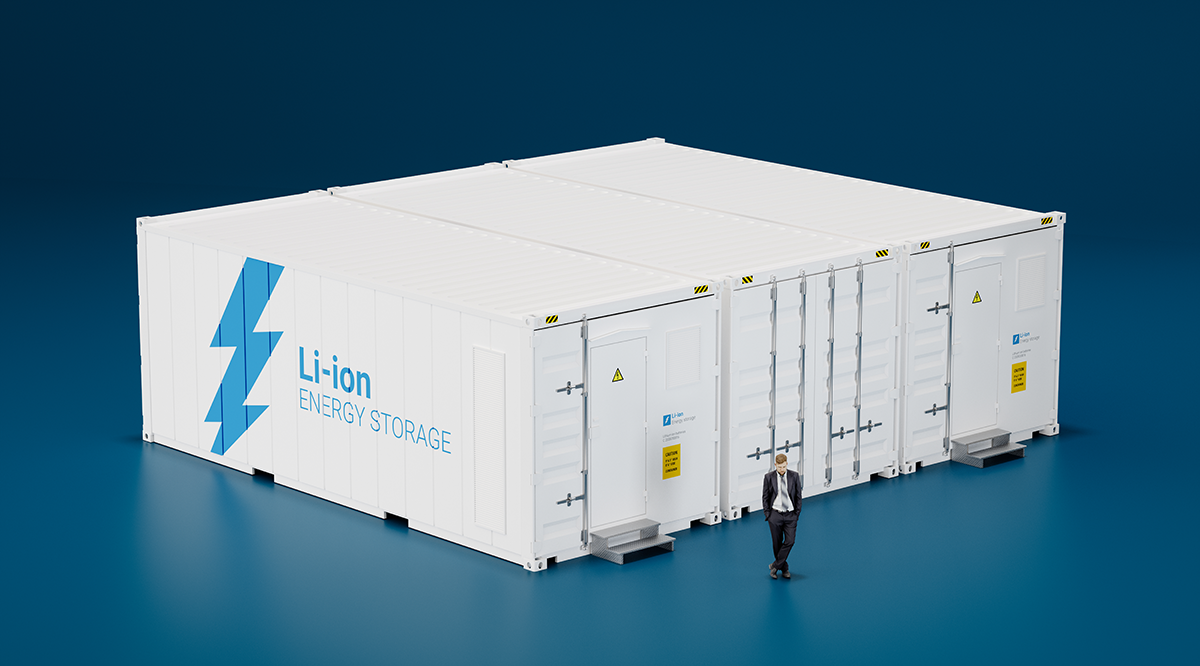 2018 has been a big year for energy storage in the Midwest and across the country. Between the hundreds of megawatts (MW) that have been deployed and are now operational to the detailed policy work to enable the next wave of business models, there has been no shortage of work for energy storage wonks.

The Great Plains Institute has continued to engage in a rapidly evolving energy storage space in the Midcontinent and across the country over the last year. The goal of our work has been to make progress on policies and electricity market rules that can enable increased deployment of energy storage to reduce the carbon intensity of the Midcontinent electric grid. This post is intended to provide an overview of how that work has progressed and some new opportunities emerging for energy storage.

In early November 2018, my colleagues Mike Gregerson and Steve Dahlke visited the California Independent System Operator (CAISO) to see firsthand the challenges and opportunities of integrating six gigawatts of rooftop solar PV along with copious amounts of grid-scale solar, hydro, wind, and a rapidly growing fleet of battery storage assets. Referred to commonly as the “Duck Curve,” as shown in figure 1, these variable resources can cause a steep reduction in net load when they are plentiful (e.g., the sun is shining) and demand is low, and then requiring a major ramp up of other resources as the variable resources become less available (e.g., the sun goes down) and demand goes up (e.g., when people get home from work). CAISO deals with a 9,000 MW ramp within 30 minutes on a regular basis during the afternoon drop of solar production and increase in demand. This ramp happens on a system that peaks between 40,000 and 50,000 MWs total. This issue is not expected to go away anytime soon as policies and economics continue to drive solar development. 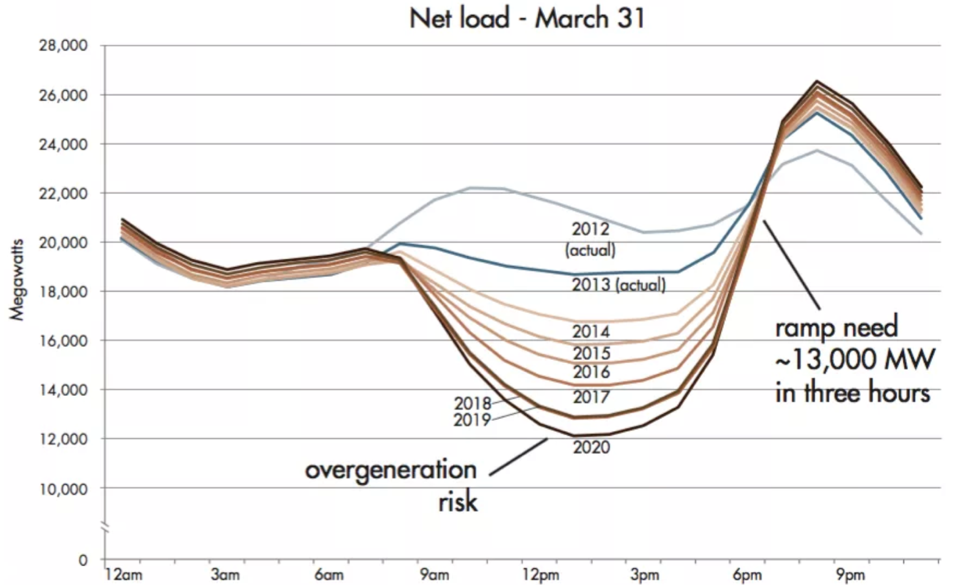 One option to manage this ramp could be to deploy energy storage. CAISO currently has about 140 MWs of energy storage operating on its system with several other large projects under construction. This is a great learning opportunity to better understand the control and operation of these units and provide lessons learned to the rest of the industry. One approach could be to use the storage assets to capture production from the solar PV throughout the state later into the day, effectively shifting load from the evening to the middle of the day. If the market signals are effective, storage can help shave the belly and the head of the duck to effectively reduce the system-wide ramping needs.

Another option to deal with this growing challenge would be to integrate into a larger regional independent system operator (ISO) and tap into the benefits of regional diversity. The California Legislature didn’t pass legislation to create a western RTO/ISO, but CAISO is continuing to push forward with the regional Energy Imbalance Market (EIM), which will better link California’s grid with those of seven other states. So far, four utilities have joined the EIM with a fifth slated to join in 2019, leading to more than $500 million in savings since November 2014. In reality, grid operators need as many tools in the tool box as they can get to deal with this type of challenge. A more interconnected grid with more ample storage, demand response, and flexible generation is much more capable than a system with only one of these options (see GPI’s 2017 study on the benefits of large competitive markets for wind energy).

Back here in the Midwest, the Midcontinent Independent System Operator (MISO) and its stakeholders, including GPI, have been hard at work over the last year to develop a compliance plan for the Federal Energy Regulatory Commission’s (FERC) Order 841, which was the landmark ruling issued in February 2018 requiring the ISOs throughout the country to create market rules to allow energy storage to provide all market products for which it can technically qualify, while accounting for the unique physical and operational characteristics of energy storage. In plain English, this means MISO and the other ISOs must make sure their market rules don’t inadvertently contain barriers to energy storage, thus allowing storage to compete in the wholesale electricity markets.

For example, prior to Order 841 there was not a way for storage to submit a continuous market bid to buy and sell energy and for that offer to be inherently constrained by the state of charge of the asset. This meant that the owner of the resource would have had to actively manage the bids of the resource in real time, a tedious and inefficient task. Post-Order 841, the asset owner will be able to select a charge/discharge scheme that best fits the operational needs of their asset and their market strategy, including the ability to continuously participate in the market buying and selling energy based on economic parameters and the state of charge of the asset. While much of the discussion during the development of this compliance plan was focused on battery storage, we also expect these options to provide incremental efficiencies to the large pumped hydro storage resources in MISO’s footprint.

On December 3, 2018, MISO submitted its compliance filing to FERC with a planned implementation period of one year. If this process continues to move forward as expected, the first energy storage projects participating under the Energy Storage Resource participation model could go live in March 2020, due to the timing of MISO’s network and commercial model updates.

As a result of this work and declining costs for battery storage systems, particularly for lithium-ion battery storage in particular, the Midcontinent is seeing rapid growth in new energy storage capacity in the development pipeline. MISO’s interconnection queue currently has 580 MWs of battery storage with expected in-service dates ranging from 2019 to 2020. When these projects come onto the system, they will be able to provide a whole host of reliability and market services to improve the reliability and efficiency of the regional transmission grid because of Order 841. While we have been involved in this process from the start and believe MISO’s proposal will greatly improve the viability of storage in the region, our work now is to evaluate the compliance filing to ensure it meets all of the requirements of the order.

In addition, there are market and planning reforms needed to ensure that storage is fully leveraged as part of the decarbonized electric system. While Order 841 has moved the ball forward in a significant way, there remains the ever-present policy lag. Between the time when the FERC issued its proposed rule that ultimately became Order 841 and now, storage technology and the business models developers and utilities are tapping into have evolved. For example, MISO’s Energy Storage Resource model is designed to integrate stand-alone storage into the MISO market but pairing some other generation resource with storage is quickly becoming a prevalent deployment approach. Lawrence Berkeley National Lab released an annual review of utility-scale solar throughout the country and in their most recent report, they noted that the incremental cost to add storage to a solar project in 2017 was about half of what it was in 2016—and they expect this pairing to begin proliferating in earnest in 2018.

There are several potential benefits of pairing storage with solar from a development perspective. There is cost reduction potential through the sharing of the invertor, reduced siting and permitting costs, reduced interconnection cost, and the potential to leverage the investment tax credit, all depending on the design of the system. There are also advantages from a carbon reduction standpoint in knowing that the storage is being charged primarily, if not exclusively, from the solar resource and because this approach can improve the capacity value and reduce interconnection costs for the solar resource, thus potentially enabling more to come onto the system. Many of the same benefits can be achieved for wind integration, though the storage capabilities needed for an effective pairing with wind are a bit more challenging with today’s technologies at current costs.

So how do we fully tap into this potential? Continued evolution of market rules. MISO’s current market system does not have a way to optimize a hybrid resource. Instead, the asset owner would be required to put the solar or wind asset and the storage asset into the market separately and manage the bid parameters as needed to achieve their market strategy. Sound familiar? This is the same issue stand-alone storage had been dealing with before FERC Order 841. GPI and other stakeholders are already working to garner support for MISO to address this issue and have received positive feedback. But with all major changes to wholesale electricity markets, this reform will take time.

In the meantime, we expect to see further deployment of storage both on the transmission and distribution grids throughout the region, allowing MISO and the region’s utilities to gain operational experience and get comfortable with how they operate. This is an often understated but absolutely necessary step toward tapping the full, flexible potential of energy storage technologies.

The pace of deployment of energy storage throughout the region is increasing at an impressive clip, driven largely by cost declines and expanded consideration of storage in market and planning processes. But we are still at the early stages of figuring out how storage can really help contribute to decarbonizing our energy system. As California grid operators learn more about how to operate large fleets of these resources, they will share those experiences throughout the industry. The same will happen in MISO as storage interconnects to its system and participates in its markets. State-level resource planning processes will continue to take storage into account for an expanded set of applications and enable diverse operational regimes. And through all of this, it will be important to continue thinking critically about the role of energy storage and how its unique flexibility can drive beneficial outcomes.