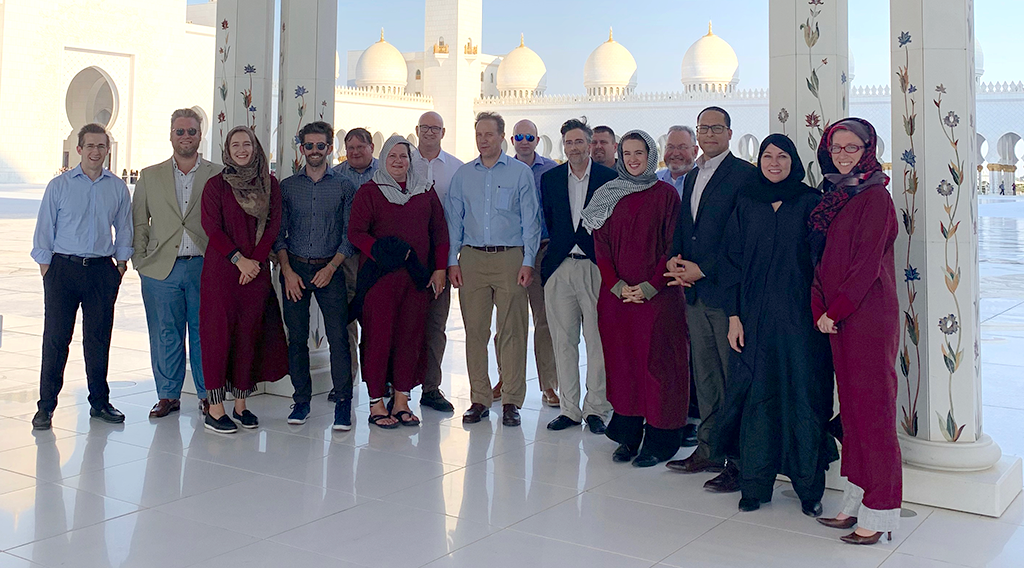 Representatives of US industry, labor unions, state and federal officials, environmental and clean energy NGOs, and philanthropy joined the Great Plains Institute (GPI) in September 2019 on an American public and private delegation to the United Arab Emirates (UAE), Belgium, and the Netherlands to explore carbon capture in steel production and see leading commercial-scale examples overseas of carbon capture and utilization projects in operation and under construction.

There is a growing recognition and appreciation of the complex challenges associated with decarbonizing steel production and other key industrial sectors. Not only is this sector essential to a modern life to which billions of people aspire, it also underpins national economies and a high-wage jobs base. Roughly one-third of global carbon emissions come from the industrial sector, and industrial emissions are growing at twice the rate of emissions as a whole.

Here’s a brief summary of the key takeaways, described in more detail later in the post:

Over half of industrial carbon emissions occur in just three sectors: steel, cement, and basic chemicals. Steel production has the largest share at 3.2 billion metric tons of carbon dioxide (GtCO2) per year, followed by cement (2.5 GtCO2) and chemicals (1.9 GtCO2). Moreover, these sectors rely on chemical processes in which carbon emissions are a product of the chemical transformation and cannot be eliminated through efficiency or electrification with low- and zero-carbon power; indeed, about half of all emissions associated with steel production represent such direct process emissions.

On average globally, every one of us has 220 kg of steel produced per year on our behalf. We use it for everything, but mostly for big things, such as buildings, infrastructure, and vehicles. Steel has very few production pathways and they all have the same steps: extraction and preparation of the iron ore; reduction; conversion and alloying; and casting, rolling, and forming into the final steel product. The chemical process in the reduction phase inherently releases CO2.

Fortunately, tangible technological solutions exist at commercial scale or are nearing deployment that enable continued steel production at a much-reduced carbon footprint. The facilities visited by the delegation in the UAE and Belgium provided a firsthand opportunity to learn from their example.

Delegation participants received a generous introduction to the UAE by Abu Dhabi National Oil Company (ADNOC). As the world’s 12th largest oil company by production and the producer of 3.1 billion barrels of oil per day, ADNOC has a great interest in the potential CO2-enhanced oil recovery (CO2-EOR) can provide for the future of Abu Dhabi.

The first oil fields in Abu Dhabi began production in the late 1950s and early 1960s, which made the emirate the prosperous land it is today. The UAE recognizes climate change and the effects it will create for their climate and economy. Carbon capture and storage is one of the key elements for UAE in continuing economic growth and acting on climate change by unlocking new potential to reduce their carbon footprint and contribute to the production of their most lucrative commodity.

The first CO2-EOR pilots at ADNOC were developed in 2009 by Masdar, an arm of the UAE’s sovereign wealth fund, Mubadala. After a successful pilot with Emirates Steel, Masdar started working with the company as a source of CO2 for the first carbon capture project. ADNOC and Masdar partnered to build a CO2 capture and compression facility and pipeline, totaling an investment of around $125 million. The carbon capture technology came online in 2016, capturing and utilizing around 800,000 metric tons of CO2 annually.

The Emirates Steel facility is the only steel plant integrated with active carbon capture technology in the world today. Due to the specific type of technology (HYL technology) used at Emirates Steel, a high-purity stream of CO2 is created in the process, making carbon capture economically viable with a CO2 cost of $30 per metric ton. The CO­2 is captured using an amine capture unit and piped next door to the dewatering and compression facility, Al Reyadah. From there, the compressed, pure CO­2 is transported about 45 miles by pipeline to be used for CO2-EOR. ADNOC estimates the potential to use and store 22.7 – 28.4 million tons of CO2 per year through EOR.

The delegation then traveled to Ghent, Belgium to visit the ArcelorMittal steel plant and their many decarbonization projects, including one specific carbon capture demonstration with Illinois-based LanzaTech. ArcelorMittal Belgium CEO Manfred Van Vlierberghe described steel as the “cornerstone” of a circular economy. Steel is the largest and most sustainable contributor to world prosperity and to create prosperity in developing countries, more steel is required. The current amount of scrap metal is insufficient to meet the global demand and quality, so new steel made from iron ore, in addition to scrap, is needed. The CEO also pointed out that no clean energy can be made without steel. In fact, onshore wind turbines require 300 tons of steel per MW. Steel produced at the Ghent facility has one-third lower CO2 emissions than elsewhere in the world.

The carbon capture commercial technology demonstration with LanzaTech along with several other carbon management pilots at the ArcelorMittal’s Ghent plant are central to the global company’s broader decarbonization ambitions. The “Steelanol” project with LanzaTech will be a commercial-scale production of ethanol from captured carbon monoxide emissions (a CO2 precursor). Currently under construction, the plant expects to produce just over 20 million gallons of ethanol annually using bacteria to convert waste carbon monoxide emissions to ethanol.

Following the tour in Ghent, the delegation moved to The Hague, Netherlands to share in discussion and presentations at Shell headquarters. Shell representatives shared their climate vision and its involvement in the Oil & Gas Climate Initiative, a partnership of 13 global oil companies. To date, Shell is involved in seven large-scale carbon capture projects.

In Europe, specifically, carbon capture is focused on industrial processes. To drive the deployment of carbon capture, use, and storage along with other innovative technologies, the European Union Emissions Trading System (EU ETS) Innovation Fund was created. The EU ETS is one of the world’s largest funding programs for the demonstration of innovative low-carbon technologies. In the EU, carbon capture hubs and hydrogen will play an important role in decarbonization.

Two significant projects were noted during the session at Shell:

The time for deployment is now in key industrial sectors

Last year’s congressional reform of the US federal Section 45Q tax credit for geologic storage and beneficial utilization of captured carbon dioxide and carbon monoxide provides industry with the most significant incentive in the world today for the commercial deployment of carbon capture and utilization technologies.

The delegation aims to catalyze understanding and engagement among key stakeholders to support the development of commercial-scale projects by the US steel industry to take advantage of this critical, but time-limited, opportunity of the 45Q tax credit. To qualify for 45Q, any project must begin construction between now and the end of 2023 (the timeframe for the current authorization of the incentive). Given the capital-intensive nature of carbon capture projects, the time required for project development, permitting and financing, and lack of commercial experience with the technology in the steel industry, the new 45Q program’s commence construction deadline at the end of 2023 creates real urgency for the industry to begin exploring potential projects.

By providing US industry executives and their key stakeholders with an opportunity to learn together about technology options overseas and explore ways to collaborate on their return, this delegation and subsequent follow-up activities aim to create the conditions for the US steel industry to benefit from an incentive-based approach to fostering innovation for the future.

Delegation participants plan to use lessons learned to work collaboratively to craft a strategy for advancing steel industry projects in the US, including recommended policies and actions by federal and state governments necessary to help potential projects achieve financial feasibility.

The lessons learned also will directly inform and inspire the work of several ongoing federal and state and regional policy and deployment initiatives that seek to leverage the 45Q tax credit in support of the commercial deployment of carbon capture and CO2 pipeline infrastructure projects in the US.

Keep up to date with future GPI initiatives and delegations by signing up for our monthly Better Energy newsletter.