Hybrid Resources in the MISO Electricity Market: An Emerging Opportunity

Electricity markets, the federal government, and state governments across the country are working on how to address hybrid resources, which are a combination of multiple generation technologies and/or storage devices that work together to provide energy, capacity, and other grid services. This post focuses on hybrid resources in the MISO (Midcontinent Independent System Operator) market and describes their unique attributes and value to the grid, which can help inform how market rules incorporate them.

We will expand this post as a series that explores several relevant issues to hybrid resources, including how the MISO market considers these resources and why the development of market participation rules for hybrid resources is important for increasing carbon-free energy in the region.

What are hybrid resources and what do they do?

A hybrid resource is a combination of multiple generation technologies and/or storage devices that work together to provide energy, capacity, and other grid services (see figure 1 for an example of a possible hybrid). As figure 2 shows, the most common arrangement of hybrid resources is a battery paired with a solar array. This arrangement is common in part due to an effort to take advantage of the solar investment tax credit, which can include battery storage if it charges from a solar resource at least 75 percent of the time, before it expires.

There are benefits to pairing renewable generators, especially as the prices of technology (battery, wind, solar) decrease, but a hybrid can also include non-renewable generation technologies. The MISO region will likely see a variety of hybrids apply for interconnection to the grid as market rules for hybrid generators are developed.

Figure 1. A possible hybrid resource: A battery, solar array, and wind turbine behind one point of interconnection (POI)

Hybrid resources are on their way toward becoming a material part of the electricity supply across the MISO region. The Federal Energy Regulatory Commission Order 845, issued in April 2018, allows generators to be studied for interconnection at less than their nameplate capacity either at the time of entering the interconnection queue or by adding storage to an existing project. This mechanism makes it easier for multiple generators to interconnect behind the same point on the grid, setting the stage for hybrids (see figures 2 and 3).

While one-off projects have popped up across the Midwest over the last few years (see Connexus Energy’s Solar + Storage project completed in October 2018 as an early example in Minnesota), the MISO footprint could see upwards of 3,000 megawatts (MWs) of hybrid resources interconnect and inject electricity onto the transmission system in the near future (as shown in figures 2 and 3). 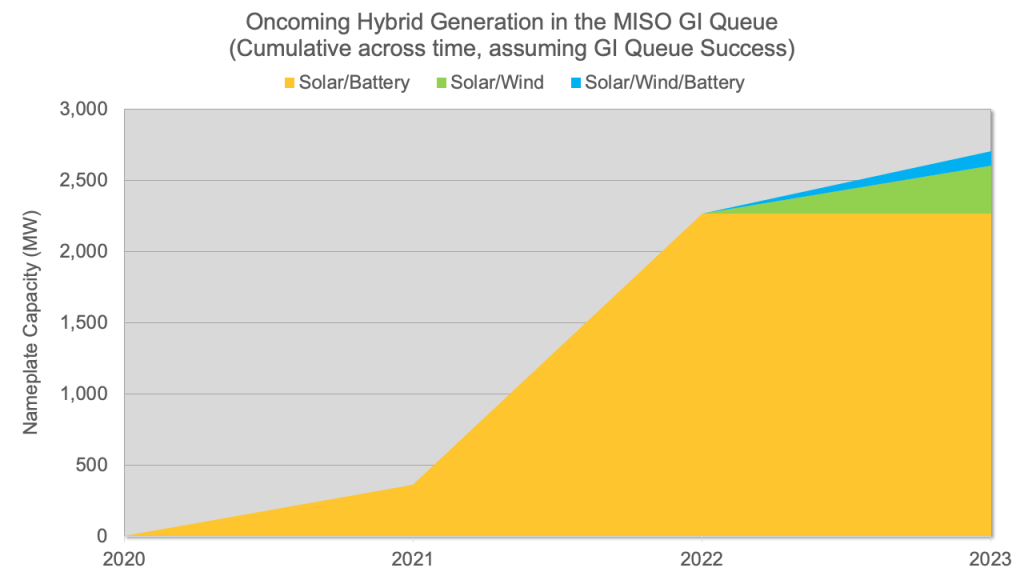 Source: Maggie Kristian, Great Plains Institute, based on data from the MISO Generator Interconnection Queue as of January 26, 2020. 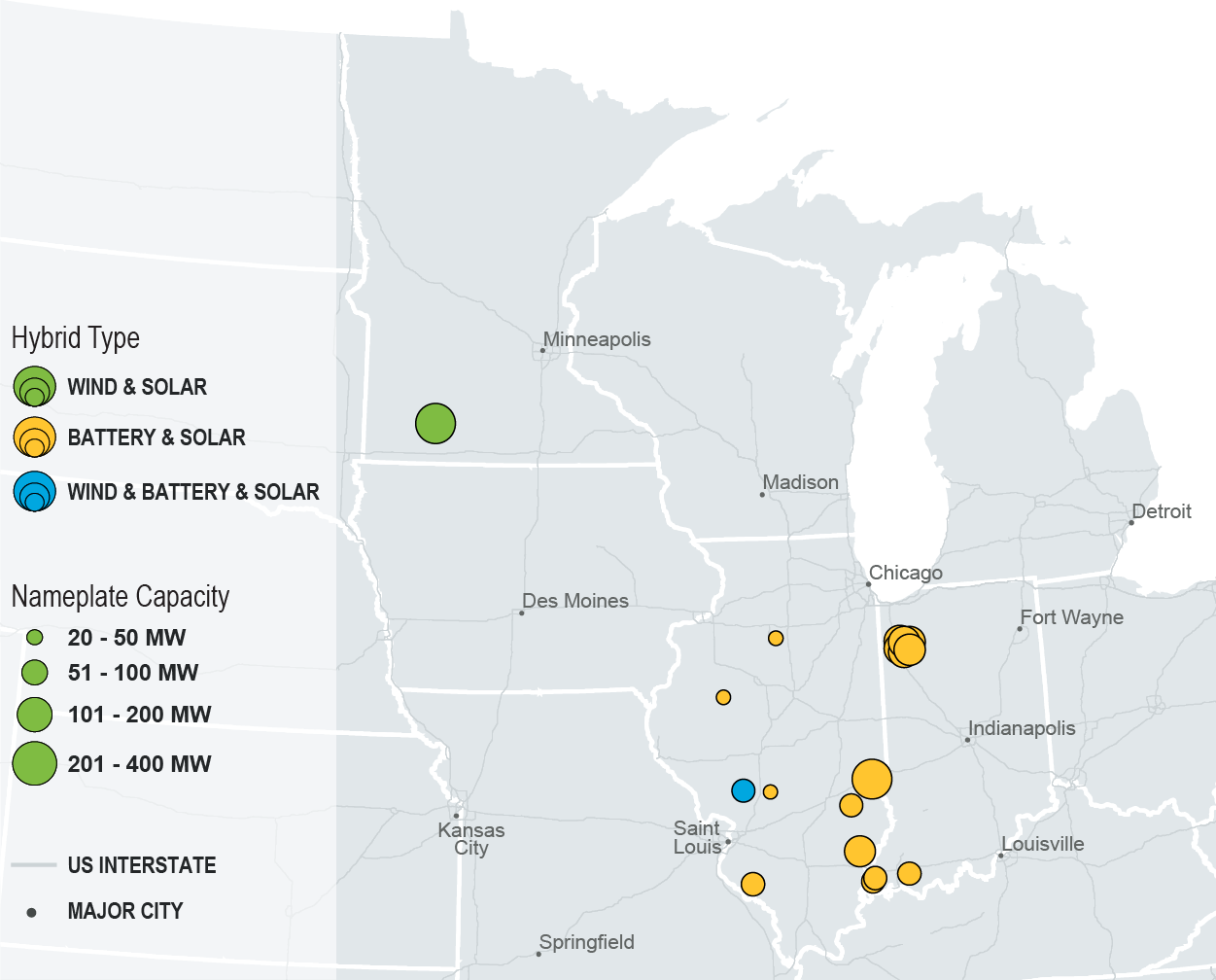 Source: Elizabeth Abramson, Great Plains Institute, based on data from the MISO Generator Interconnection Queue as of January 26, 2020.

With these forthcoming resources seeking to interconnect to the transmission grid over the next few years, MISO and its stakeholders will need to grapple with a variety of questions about the role that hybrid resources will play in the region’s energy generation future and develop the appropriate market rules to ensure they can participate in the market reliably and efficiently. To better understand how these rules should be crafted, it’s best to first understand their unique attributes and the value they may bring to the grid.

Equipment costs: In recent years, the cost of some renewable energy generation technologies like wind turbines and solar panels (see figure 4) has dropped, making it much more affordable to build hybrids that use these technologies.

Figure 4. Levelized cost of wind and solar energy in the United States, 2019

Additionally, when we think about the costs of building a power plant, we often think about the generation equipment. However, solar panels and wind turbines are not the only equipment needed; there are other fixed costs for each site like inverters, interconnection lines, etc. That means that if more generation equipment can share that fixed cost infrastructure, they can cut down on their overall cost per MW of generation. Pairing two resources behind one point of interconnection (one set of fixed costs) as a hybrid is a great way to do this.

For example, in a solar plus wind hybrid, the two paired resources could share interconnection rights: solar injecting during the day, and wind injecting at night. This would allow the combined resources to take advantage of the hours in which the other cannot inject energy (see figure 5). In the GI queue, some costs are assigned per MW of interconnection rights, so “using” those rights as much as possible helps extract more value from a hybrid generator.

By using more of their already procured and paid for interconnection rights more of the time, hybrid resources more efficiently use transmission infrastructure and could avoid paying for some network upgrades needed to expand the capacity of the transmission system. This would help relieve the bottleneck of transmission capacity and network upgrade costs that are becoming increasingly problematic in the western portions of the MISO region. 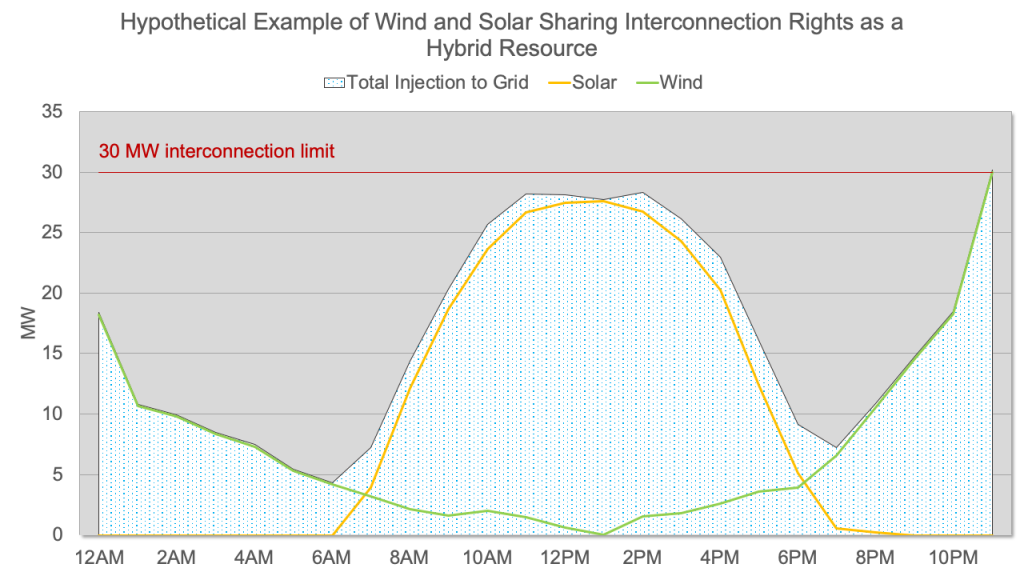 For renewable energy resources that are intermittent (like solar or wind), pairing storage can help “smooth” or “firm” the variations in the renewable resource’s output to make them more consistent, or even extend the hours in the day that the resource is available.

During times of the day when variable energy generated deviates slightly from the desired output, it creates a “jagged” supply curve (see figure 6). In this example, a paired battery could work behind the meter to coordinate with the solar resource and fill in the gaps to provide a more consistent and predictable power output.

Deviations from forecasted output for renewable generators can create challenges for grid operators and carry market penalties. By managing variability and improving predictability of intermittent resources, hybrid projects can help minimize integration barriers for renewable generation and improve their performance in energy markets.

Avoided curtailment: Shifting energy (injecting energy to the grid at a different time than it was generated) can help hybrid resources inject more energy to the grid overall. As mentioned previously, Federal Energy Regulatory Commission Order 845 allows generators to apply for interconnection rights that are less than their generation capacity, so many projects are being built with a higher ratio of generation to inverter capacity.

This means that in all hours of production, the energy production is much closer to the maximum amount of energy that the generator could inject to the grid, increasing their capacity factor. In fact, at their peak, their energy generated could exceed energy sold to the grid. Without an alternative allocation for the excess energy, it would be curtailed (not used or sold to the grid). Pairing storage with these projects can capture this unused energy and make it available for injection in later hours.

For example, if a solar-only generator had 20 MW of interconnection rights, and during its peak was generating 25 MW, the extra 5 MW would be curtailed. In a solar plus storage hybrid system, a paired battery could instead charge during that solar peak, storing the excess 5 MW for future use after the sun goes down (see figure 7). Increasing the amount of energy a resource can sell to the grid can make it both more profitable and reliable. 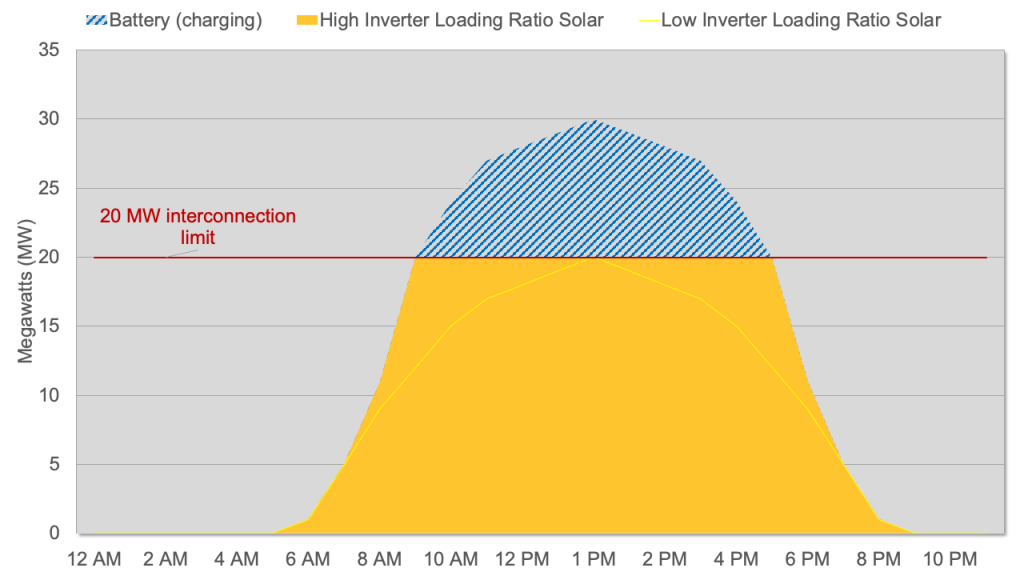 Arbitrage: Shifting energy can also increase the value of the energy that the hybrid sells to the grid. This is known as arbitrage, or a type of shifting that occurs when a resource stores energy when it is inexpensive and sells it for a profit in later hours. This doesn’t necessarily happen exclusively with energy generated on site. Batteries are already allowed to engage in price arbitrage in the MISO market, charging from the grid for later dispatch. Hybrid resources with a battery component can also actively engage is price arbitrage, both from energy generated on site or from the grid, increasing the value of the energy it sells.

Capacity: Shifting energy could increase the capacity value of hybrid resources by making them available in more hours of the day and flexible enough to generate in critical hours when load is highest. Earning a higher capacity accreditation—the rating of a resource based on its ability to provide energy during critical hours—can increase the revenue of the hybrid resource. It also gives grid operators another tool to maintain and manage grid reliability.

As resource mix and grid operations in the MISO footprint change, the flexibility to provide capacity whenever needed will be increasingly important. MISO’s Renewable Integration Impact Assessment (RIIA) has shown that as renewable generators make up a higher percentage of the MISO resource mix, the risk of losing load (being unable to deliver electricity to some consumers) condenses into a smaller window, particularly in evening, high-risk hours when solar production is ramping down while energy demand ramps up (see figure 8).

MISO needs to plan for the grid to have enough capacity to meet expected demand in these critical hours. In a high renewable system, storage components of hybrids could be used to shift generated energy to the hours that most need it (to meet the demand at those times), bringing added reliability value to the grid and revenue to the project. For example, a paired battery could shift production into the high-risk hours projected by MISO’s Renewable Impact Integration Analysis.

Figure 9: Hypothetical solar+storage hybrid in the MISO market using a battery to shift energy into hours with the highest risk of losing load

A hybrid resource could encompass any combination of resource types and consolidate their benefits. For hybrid resources that include a battery as one of the paired resources, the speed and controllability of the battery can provide significant benefits to the hybrid resources. Their extremely fast start times mean that they could be used for ancillary services that variable generators (like wind and solar) are not allowed to provide today. Even for a hybrid that pairs a resource that can provide ancillary services (like natural gas or other thermal generators) with storage, the hybrid plant may be better able to provide grid services that require frequent changes in power output, like frequency regulation. This would reduce wear and tear on the thermal generator and enable the thermal component to operate at its most efficient output levels. It could also be designed to provide services like ramping, which are projected to become increasingly valuable as renewable integration on the system increases.

What key issues have been raised in MISO?

MISO is currently prioritizing the challenges associated with integrating hybrid resources on to the grid. These issues center around market representation, capacity accreditation, and interconnection rights. After being prioritized, they will make their way to MISO’s stakeholder committees, which will dig into details and possible approaches.

As a part of our work engaging with the MISO stakeholder process, GPI will continue to monitor and participate in the discussions on these issues as the year goes on. Until then, we’ll dive deeper into what some of the key questions around hybrids mean and how MISO might grapple with them.

Stay tuned for the next posts in our series on this subject, and sign up to receive our latest updates via GPI’s monthly newsletter. 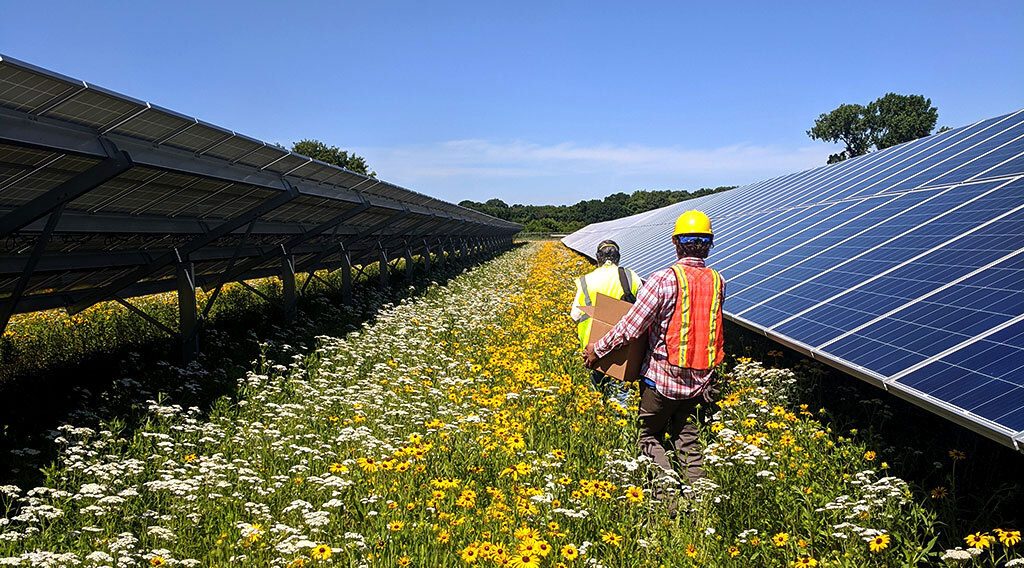 July 6, 2020 Solar, with Benefits! (Or, the Co-Benefits Approach to Solar Development)