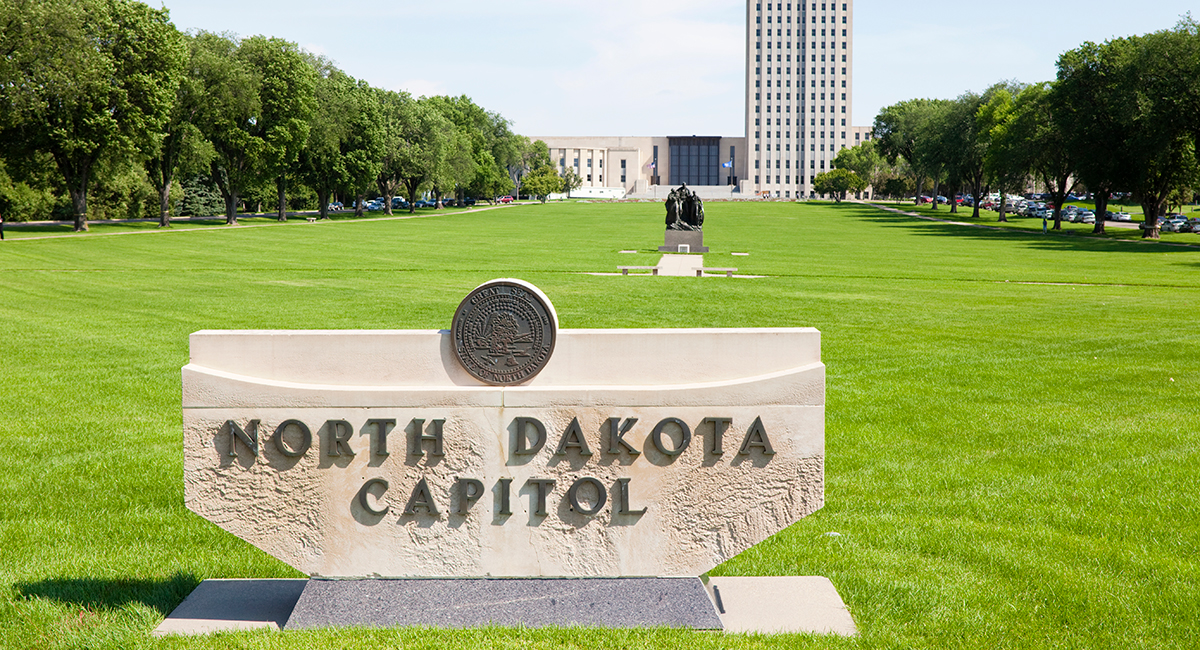 The 2017 North Dakota legislature faces a tough predicament as they work to finalize budgets and funding levels for the 2017-2019 biennium. March 2017 projections developed by the State Office of Management and Budget show projected general fund revenue shortfalls of more than $100 million.

As the legislature wrestles with how to address the funding shortfall, some are contemplating whether to use the earnings, and potentially even a portion of the principal of the state’s Legacy Fund.

In 2010, North Dakota established an oil and gas Legacy Fund through passage of a constitutional measure requiring the deposit of 30 percent of the state’s oil and gas tax revenue into a special constitutional fund. In that vote, North Dakotans formally expressed their commitment to long-term stewardship of revenue generated from a finite natural resource.

Now, in 2017, state policymakers face an important milestone that will set a precedent for future management of the Legacy Fund. Under the state’s constitution, earnings from the Fund first become available this year for expenditure by the North Dakota Legislature. The constitution also provides the Legislature the authority to spend up to 15 percent from the principal of the fund each biennium from here forward, if two-thirds of each chamber agrees.

As of February 2017, deposits into the Legacy Fund total nearly $4 billion. Legislative forecasts project that the Legacy Fund will generate $120 million in earnings available for expenditure in the 2017-2019 biennium.

In 2013, the Great Plains Institute convened a diverse group of North Dakota public, private, community, and nonprofit leaders and citizens to develop a consensus vision and policy recommendations to guide the purposes, governance, investments, and future expenditures of the Legacy Fund.

The Legacy Fund Initiative yielded a vision that North Dakota’s Legacy Fund will provide a permanent, sustainable resource for future generations that fosters self-sufficiency, creates opportunity, and enhances quality of life for all citizens.

Since the Legacy Fund Initiative was convened, much has changed in North Dakota.  During the oil boom, oil tax revenue provided increased funding streams for several state funds, both enacted in state law and enshrined in the constitution. A portion of oil tax revenue is also used in the state’s general fund to support state government. A dramatic decrease in oil prices has led to a leveling off in oil production and the tax revenue from oil production has also significantly declined. According to the ND State Treasurer, deposits into the Legacy Fund in 2014 averaged more than $90 million per month, compared with $30 million per month in 2016.

The 2015 North Dakota State Legislature also made adjustments to the tax treatment of oil production and changed some of the ways in which oil tax revenue is distributed among state and constitutional funds.  The legislative changes also included removing the possibility of an additional deposit into the Legacy Fund from the Strategic Investment & Improvement Fund (SIIF) once a certain fund threshold was reached.

Given the considerable changes in oil price, production and revenue projections, and the changes in state law, GPI sought additional grant funding through the Consensus Council’s Community Innovation Grant Program to revise the assumptions in the Legacy Fund investment scenarios for the future. The revised scenarios contemplate the four options for the future expenditure of Fund interest and principal that were used in the 2014 analysis. The updated assumptions include the 2015 legislative change reducing the oil production and extraction tax rate from 6.5 percent to 5 percent. In addition, the scenarios contemplate an oil price of $42/bbl in 2017 (derived from State of North Dakota projections for the 2017-2019 biennium). The assumptions also utilize the US Department of Energy’s Annual Energy Outlook (AEO) 2016 projections to align the growth of oil prices in North Dakota with the growth of Brent Spot crude prices through the mid-2020s.

The chart below illustrates the scenario result based on the revised assumptions: 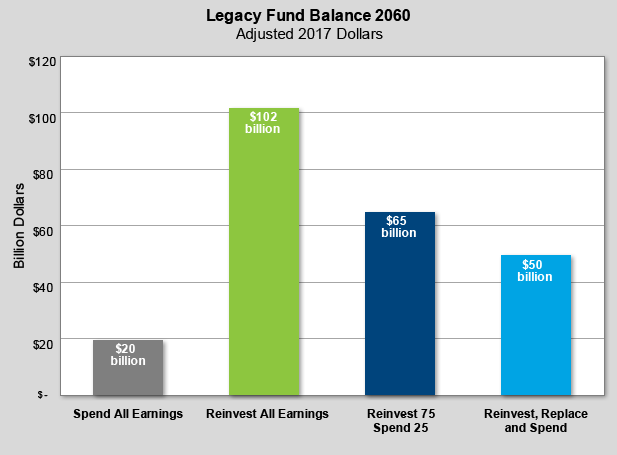 With these changes to state policy already made by the Legislature, combined with lower projected oil prices and production, the 2060 fund balance is now forecast to fall dramatically, ranging from 53 to 63 percent less overall across all four scenarios than what was projected in 2014. However, the difference in value between the “Spend All Earnings” scenario and the “Reinvest All Earnings” scenario remains considerable in the updated calculations– an $80 billion difference. This result reinforces the original scenario finding in 2014 that reinvestment of earnings into the Legacy Fund in the early years will result in a much greater Fund balance in 2060 and beyond.

After reviewing the scenario results in 2014, the Legacy Fund Initiative participants identified a preferred scenario – “Reinvest, Replace and Spend” – for future governance of the fund. Under that scenario, the revised projections show the Legacy Fund balance growing to $50 billion by 2060 (compared to $93 billion calculated in 2014), while providing North Dakotans important benefits in the near to medium term and fully replacing state oil and gas revenue as production peaks and starts to decline. Under this preferred scenario, the Legislature would spend 25 percent of annual earnings from 2017-2039 and reinvest the remaining 75 percent back into the Legacy Fund until oil production peaks and begins falling. At that point, the Legislature would still spend 25 percent of annual earnings, but use a portion of the remaining 75 percent of earnings to replace diminishing state oil and gas revenue, while reinvesting the rest into the Fund.

The table below compares the results of the scenarios in 2014 with the updated scenarios to reflect tax and other policy changes made by the Legislature and new oil price and production projections:

It’s clear that lower oil prices and leveled-off production, coupled with changes to oil tax treatment and other policies will continue to impact state government revenue flowing into the Legacy Fund, resulting in a significantly lower future Fund balances. Nevertheless, the projections in both 2014 and 2016 underscore the power of compounding interest over time and the fact that prudent management (Scenarios 3 & 4) by the Legislature today has the potential to double or even triple the balance of the Legacy Fund in the future.

North Dakota is at a critical juncture. As state policy leaders wrestle with balancing the state budget and funding state priorities with reduced sales tax and other revenue, some may look to utilize all the Legacy Fund earnings (and potentially principal) to shore up funding gaps. Their decisions today will significantly determine the ultimate scale of the Legacy Fund’s asset base and the eventual capacity of this public endowment to make long-term, sustainable investments in North Dakota’s future.